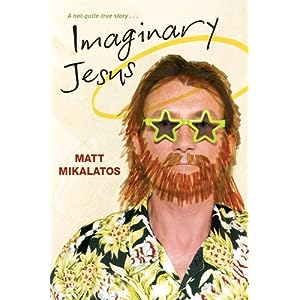 I’m part of the Ooze Viral Bloggers, a random group of bloggers who have the opportunity to get a few books for free in exchange for writing reviews.  I don’t do it a lot, because to be honest, many of the books just don’t sound that interesting, and I always have a stack of 3 or 4 books on my desk waiting to be read.

I made an exception with Imaginary Jesus after reading a sample chapter, which starts out with the author and Jesus in a Portland vegan cafe. Then, Jesus gets punched out.  How could I resist a book like this?

The book is actually not sacrilegious or irreverent. It is, however, a great deal of fun, making a point while poking fun at Marxists, Portland, Mormons, vegans, and a whole lot more (the author lives in Vancouver, WA, just across the river from Portland). As I live in the Salem area, I enjoyed the local humor immensely.

The point of the book is that we tend to remake Jesus in any number of ways, depending upon our own tastes and culture, resulting in the creation of imaginary Jesuses. In fact, you’ll never dream of how many there are until you read the scene that takes place in Powells Books, the largest bookstore on the planet. As Matt travels around Portland (and 1st century Israel) with the Apostle Peter and a talking donkey named Daisy, he meets many imaginary Jesuses, an ex-prostitute, an atheist Bible Study at Portland State, and 2 Mormon missionaries named Elders Laurel and Hardy. Along the way, he deals with some personal issues and finds that no imaginary Jesus is quite good enough.

A few reviews compared Mikalatos to C.S. Lewis; I’m assuming only because they both use fiction to make a point. However, I wouldn’t go that far; he’s got a ways to go before he’s in Lewis’ league. Mikalatos is, perhaps, what Terry Pratchett would be like if Pratchett were a Christian.

The only negative comment I have is that the book suddenly becomes serious, and it’s a bit difficult to make that shift. For a few pages I wondered if Mikalatos would just create a new, improved imaginary Jesus for us to believe in, but I think he stops short of that. The last chapter picks the pace back up again, so it ends on a good note.

As I was reading through the more serious chapter, it occurred to me that no matter what we try to do in representing who Jesus “really is,” we always end up creating somewhat of an imaginary Jesus. We simply can’t recreate the same emotions that Peter or Mary had about him, as we’ve never known the flesh-and-blood Jesus. It’s not a fault of ours, it’s just the truth. To try to manufacture or replicate the emotions of others is simply to create imaginary feelings.

But, I think it’s good to be self-aware of our own tendencies to create false Jesuses for our own purposes, and in this regard, I think Matt Mikalatos has succeeded. I can’t wait for his next book, Night of the Living Dead Christians.