In my last post in this series, I promised to examine the neo-Platonist influences in Eastern Orthodoxy.  If I knew then what I knew now – or didn’t know then what I don’t know now, I wouldn’t have made such a promise.  As it turns out, trying to pin this issue down has a number of problems.  While there are a great many sources discussing Augustine’s neo-Platonist orientation, there are very few – that I have found – discussing in any specificity the neo-Platonist influence on the Eastern Church.  And, of the sources I did find, I found a great deal of disagreement.

What I will do in this post is lay out a sketch of the issue as I currently understand it, which if nothing else will show what I don’t know, hopefully inviting input from others.

First, neo-Platonism refers to the 3rd century revival of Platonism, mainly as taught by Plotinus, who apparently was trying to clarify some misunderstood elements of Plato’s writings.  Just as contemporary philosophy has impacted Western theology, neo-Platonism also had an influence on some of the Greek-speaking early theologians, as well as on such Western theologians as Augustine. 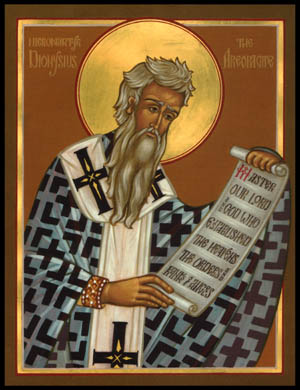 Many of the Church Fathers showed signs of neo-Platonist thinking, including Gregory of Nyssa, Origen, Maximus the Confessor, and the most-often connected with neo-Platonism, the fellow known as Pseudo-Dionysius, also known for developing the Eastern Church’s Apophatic approach to theology.

The Orthodox, however, reject the notion that any Platonist or neo-Platonist philosophy made its way into their theology. Rather, they say that Gregory, et al., only used neo-Platonist terms to explain what the Church always believed. For example, Gregory of Nyssa used neo-Platonic language to argue for the infinity of God (contrary to the teaching of Origen, who held to the earlier Platonic concept that God was finite, as He could be known).  (The concept of the infinity of God is a key element in the later development of Apophaticism.)

While there are certainly neo-Platonic concepts used in the Eastern church, I can’t say at this time whether the church was influenced by the neo-Platonists, or whether they are correct in that they only used those concepts to convey a pre-existing theology.

This Eastern way of looking at the development of theology – that the formation of Orthodox theology and Tradition only clarified the Apostolic faith that the church always believed – is if nothing else, convenient.  It also appears somewhat circular, based on the belief that the Orthodox Church is the one and only true church and the belief that God is preserving in the church the Apostolic faith.  It seems to assume that anything the Orthodox Church believes is necessarily Apostolic and correct, even though there have been a number of disagreements over the years.

While I am obviously impressed by much in the Eastern traditions, there are elements of Orthodoxy that I have a hard time with, which I will try to outline in coming posts.