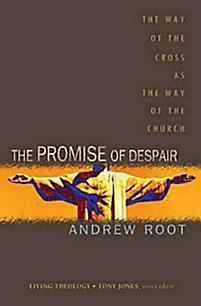 The Promise of Despair may not be the best title.  It probably won’t attract the same crowd that bought any of those “stories my kid made up about heaven” books, and some will assume it’s another “you’re not suffering enough for the Kingdom” teaching.

Then, there’s the “emergent village” logo on the back, which is another red flag for many people (including me).

I probably wouldn’t have given the book a second look if it weren’t for the fact that it was so highly recommended.

Contrary to any preconceptions I could have formed, The Promise of Despair has the potential to be the most life-changing book I’ve read in a long, long time.  I say potentially because I’ve only just finished it—a year or 2 down the road, and I can better assess what impact it is having. But, there are strong indications that it has that kind of potential, at least for me.  And, it’s a great book to read during Lent, as a primary focus is Luther’s theology of the Cross.

One of the reasons this book is a potential life-changer for me is that this is a book about death.  Not about dealing with death, or grief, necessarily, but about death itself.  I have had a life-long fear of death, and have developed a pretty decent hatred of it.  I’ve seen it too many times as family and friends have been taken through disease, accidents, suicides, and simply oldness, and I live with death on a day to day basis.  So, it’s a subject close to my heart.

Root begins by discussing Nietzche’s assessment that modernism has essentially declared that God is dead, and the despair that results from our faith in progress and hope for the wrong future. It’s a brilliant assessment of modern culture, postmodern modern culture (postmodernism is just a branch of modernism),  and what has resulted to the church as it has attempted to cover over the reality of death and despair instead of dealing with it.  This is not your typical cultural critique; this is an analysis of a society’s failure to deal with death and it’s impact on Christian theology and practice.

The second reason for me is that I finally think I grasp Luther’s theology of the cross. I was raised in a Lutheran church that was not really all that Lutheran. I went through Confirmation classes and all, but I don’t think I ever saw a Book of Concord until I bought one a couple of years ago, and I had never heard the phrase “Law and Gospel” that I can recall.  But, I watched “Here I Stand” several times.

So, over the last few years I have tried to get a grasp on the basics of Lutheran theology that other Lutherans all seem to know, and this book clarified a number of things. Now I am more sure than ever that the Lutheran understanding of man and God is far superior (i.e. Biblical, or perhaps “correct”) to the Calvinism that permeates most evangelical theology.  In other words, the book is not a Lutheran book, but it uses some of Luther’s language to express Biblical truth about what death really is, and that—as the author puts it—”we do not suck,” but that we are all victims, as it were, of sin and death, which were defeated at the Cross.  Only by coming to grips with “the monster” do we get to see the true victory of the resurrection; if we don’t embrace death, we don’t get to embrace life.

As I read through this I thought of a fitting quote that I heard years ago that was attributed to Camus (though I have not been able to track it down): “Life begins when you come face to face with death and realize that anything is possible.”  I have understood this, but didn’t realize that this in fact was a kind of restatement of Luther’s doctrine of the Cross. Kind of.  Resurrection life is only possible through Christ taking on death head-on.

The Problem with the book

The big problem I had with the last portion of the book was that the author seemed to lose his way a bit, trying to create practical applications.  He starts using questions his son asks as chapter themes, which is kind of cute, but didn’t really help make his point, causing him to stretch a bit too much to keep the analogy going.  This was especially true with the last chapter, “The Christian faith is a secret that must be kept.”  Here, he completely lost me. I never figured out why it was supposed to be a secret.  I don’t think he really knew how to end the book.

However, that doesn’t change the fact that the essence of the book is life-changing. As he explains in the book, all of Western culture has issues with death that keep us from really grasping the essence of the Cross and the power of the Gospel.

Buy the book, read the book. It’s that simple. Skip the intro if you want, and skim where you need to.  It’s short but powerful.

3 thoughts on “Book Review: The Promise of Despair”