Michael Hyatt is CEO of Thomas Nelson Publishers and Chairman of the Evangelical Christian Publishers Association.  He is also a Deacon at St. Ignatius Orthodox Church in Franklin, Tennessee.  That’s right, Orthodox church.  I recently started listening to podcasts of the Sunday School class he teaches, which are available at Ancient Faith Radio, an Orthodox Website with tons of great podcasts, all from an Eastern point of view. Hyatt’s show is entitled At the Intersection of East and West, an appropriate title for him.  He covers a number of very interesting topics including Mary, sola Scriptura, and his current series is teaching through Fr. Alexander Schmemann’s For the Life of the World, a great little book I read about 30 years ago which explains the essence of Orthodox worship. 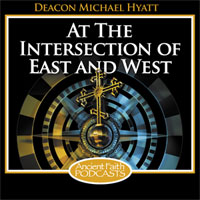 For those of us who have been raised in an Augustinian, Enlightenment-saturated church, listening to or reading theology from an Eastern point of view is often shocking, but I highly recommend it.  As far as I know, it is really the only way to get any kind of sense of what the pre-enlightenment and pre-Augustine church thought.

That’s not to say that I accept everything I read or hear from the Orthodox; no, I’m still too modern for that.  However, more and more I am tending to accept some of their views, such as the Christus Victor view of the atonement (adopted in some fashion by more and more people in the west, such as NT Wright and Greg Boyd), and concepts such as theosis (which is not unlike some of Luther’s views).   Hyatt’s thinking on sola scriptura is quite interesting: he brings up a number of issues that most people in the west don’t seem to consider, including the interesting paradox of putting the Bible above any church tradition, while not realizing that the Bible itself relies entirely on Church tradition.

I’ve been interested in Eastern Orthodox theology for nearly 30 years, and find that more and more, the ancient faith is perhaps more relevant than modern evangelicalism.  Ancient Faith Radio is a great resource for exploring non-Western Christianity, and also a great place to learn about early church history and theology.