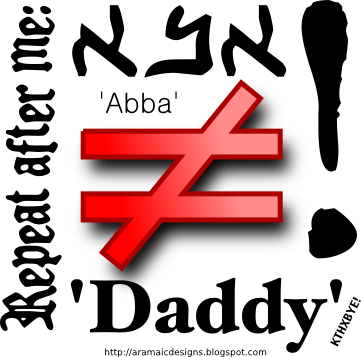 Being raised in a formal, liturgical church, I’ve always been uncomfortable with the current fad of calling God “Daddy.” In fact, I cringe every time I hear it.

I used to think this was my own issue, but as it turns out, I have been right to cringe because “abba” does not mean “daddy!” I cringed because I always cringe when adults talk baby-talk.

As Steve Caruso explains, the abba-daddy myth began in the early 1900’s when one guy you’ve never heard of suggested the “daddy” meaning. He didn’t base his thinking on real scholarship, but based on a hunch about how children learn language (which was wrong, incidentally). He (Joachim Jeremias) also admitted that “abba” was an Aramaic term of respect for older, wise men.

Somehow, someone who thought this analysis fit their own privatized, experiential version of Christianity started spreading the myth around, and now it’s believed by millions of people who are led to believe they must share this gushy kind of sentimentality or be emotionally challenged.

I don’t know how long I can go on cringing—the next time I hear someone refer to God as “daddy,” I may scream.  Just so you know.